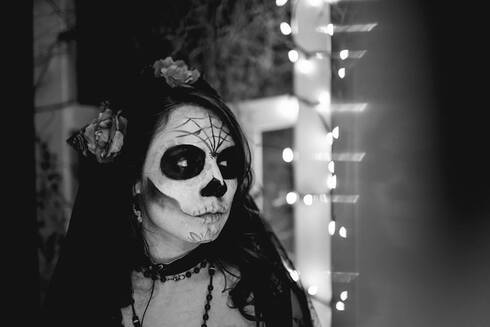 Sopo Productions was started up by Justina Carubia in 2017 in efforts to gain motivation toward creating and releasing more multimedia material out into the world. She started making films as a child when she would steal her parents' family camcorder and film little skits, comedic sketches, and music videos with her little brother Vincent. Back before the digital age, she would edit her skits together with two VCRs and overdub music with her discman or a double track tape recorder.  As she grew older, she didn't really see her obsession with the film medium as a possible career choice, and she naturally started veering off into visual arts and songwriting.

​Justina Carubia is first and foremost a singer/songwriter with a background in visual art and illustration. She attended the duCret School of Art in Plainfield, NJ where she studied Fine Art, Graphic Design, and Illustration until graduating in 2005. In the years following her graduation, she pursued a solo singer/songwriting career and made a name for herself around the New Jersey local music circuit. It was her brother Vincent, who was inspired by their creative filmmaking as children, who decided to pursue film as a career, and attended the Savannah College of Art and Design, in Savannah, Georgia. Distance never deterred the brother and sister creative duo from collaborating together, and in 2007 Vincent directed a music video for one of Justina's original songs "Formula".

In 2005, she began making YouTube videos to showcase her musical talents, and the process of filming and editing her own videos lead her to grow passionate about the film medium. She has written, directed and starred in a handful of her own short films and music videos.

Most notable was her creation Chipper Chap and the Gang: Escape From Dirty Sanchez (2011), a silent western spoof where all the actors switched their genders to play characters of the opposite sex. This film went on to showcase at the Queer Fruits International Film Festival in Australia during their opening night New Years Celebration.

Justina has also directed some other projects including a music video for La Llorona, and a Rockumentary surrounding her band Stelladeora's recording process of their 2012 EP "A Dosage From Delusional".

She is currently working on an animation project for 2020 and will release more news on that soon!